Sheet metal manufacturing has come a long way, thanks to automation practices.

Automation refers to technology that reduces the need for human labor. One might hear the definition of automation and assume that these practices didn't begin to evolve until the 19th and 20th centuries.

What's surprising is that sheet metal automation can be traced back to the late 15th century. In 1485, Leonardo da Vinci was recorded as having sketched a rolling mill that was seen as quite advanced.

Leonardo da Vinci's vision was realized in 1590 when a mill that used two heavy cylinders to alter metal's thickness was introduced.

Fast forward to modern times, and the sheet metal manufacturing has grown exponentially due to automation with an estimated value of around $20.5 billion in 2011.

So, what happened in between Leonardo Da Vinci's drawing and now to create such a booming industry?

What's The Evolution of Automation in Metal Manufacturing?

Most progress toward success begins in failure through trial and error.

The story of sheet metal automation is no different.

Around 1606, the puddling technique was invented. Puddling involves converting cast iron into steel through high heat exposure and stirring the material in a reverb furnace with oxidizing substances.

Through puddling, workers aimed to formulate a process that successfully converted cast iron into steel and removed some of the material's impurities such as carbon. Unfortunately, the puddling process was incredibly inconsistent in its ability to produce results due to insufficient power levels from the furnace.

It wasn't until the Industrial Revolution that sheet metal automation began to make serious progress.

The industrial revolution fostered a boom in sheet metal production.

Sheet metal manufacturers were able to produce higher quality products at an accelerated rate thanks to the advent of press brakes and assembly lines. Momentum kept building after 1760 as Joseph Bramah developed the hydraulic press in 1770, and Jean Pierre Droz streamlined the sheet metal process.

Up until and around the end of the Industrial Revolution in 1840, significant sheet metal developments consisted of:

After taking significant strides during the 18th and 19th centuries, steel manufacturing was ready to make its mark on the 20th century.

Unions are a driving force of sheet metal production. In 1969, the National Union of Sheet Metal Workers, Coppersmiths, Heating, and Domestic engineers was formed to help these workers establish proper representation.

Inventions such as the Basic Oxygen Furnace in 1967 and the introduction of air bending techniques in 1970 served to expand sheet metal manufacturing.

The last major union shift occurred in 1983 when the National Union of Sheet Metal Workers, Coppersmiths, Heating, and Domestic Engineers shifted into a trade union known as the Technical, Administrative, and Supervisory Section.

From this brief rundown of sheet metal manufacturing history, we can conclude that the evolution from a simple Leonardo da Vinci sketch to a multi-billion dollar industry is thanks to improved strategies, tools, and streamlined projects.

So, what's the current state of automation in sheet metal manufacturing?

What's The Current State of Automation in Metal Manufacturing?

TRUMPF is a prime example of a company leading the way to evolve sheet metal manufacturing.

Years after becoming a company in 1923, TRUMPF is one of the world's leading providers of machine tools for flexible sheet metal processing.

Here are some of the essential duties that TRUMPF machines perform for sheet metal manufacturers:

Smaller manufacturers can benefit greatly from technology, such as Trumpf's bending machines. Automation is critical in sheet metal bending as manufacturers won't have to convert a bending machine every single time they adjust the program. The result is a reduction in time and labor.

In 2015, Trumpf made a big leap and made 3D printing machinery for metal components available. A sign of success for Trumpf is that their sales and employee numbers continue to grow.

How Else Does Trumpf Help Evolve Sheet Metal Manufacturing?

Trump's automation page helps inform their audience of its mission when it comes to streamlining automation.

Essential tasks for Trumpf automation include:

If you're a sheet metal manufacturer, your business revolves around how quickly you respond to demand. Manufacturers that utilize technology from companies such as Trumpf can react promptly to short product life cycles and give themselves a leg up on the competition.

When you're a sheet metal manufacturer, having the ability to be flexible and adapt is vital. When the production economy inevitably shifts, modular automation from companies such as Trumpf helps your company deal with the current climate.

What's a Real-World Example of TrumpF Making an Impact?

Dane Manufacturing is a real-world sheet metal manufacturer that benefits from Trumpf technology.

Through partnering with Trumpf, Dane Manufacturing can achieve the following capabilities:

If we jump to the 'Punching' page on the Dane Manufacturing website, we are greeted with a beautiful photo of this impressive TruPunch 5000 Machine from TrumpF: 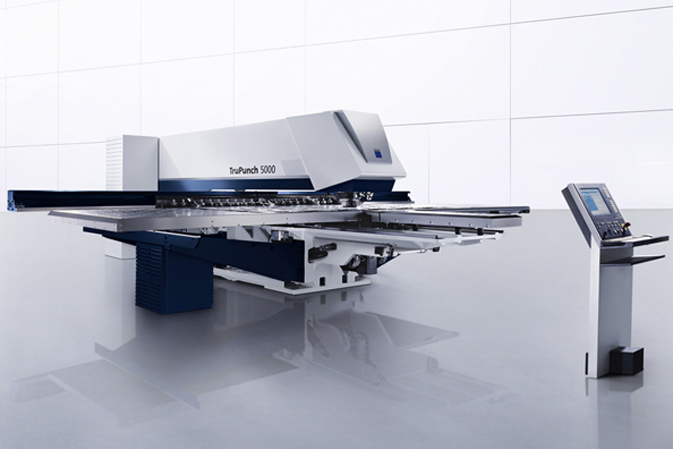 Automated punching machines from TrumpF help manufacturers such as Dane Manufacturing process a wide range of parts flexibly. Aside from punching, these modern machines can form sheet metal parts or integrate a thread.

Setup times are reduced while productivity increases. The intelligent automation of the TruPunch 5000 helps increase throughput without consistent intervention from the operator.

Feel free to learn more about how automation is impacting Dane Manufacturing by visiting our 'Capabilities' page.

At Dane Manufacturing, our metal meets your performance.

You might not have heard of panel benders as devices such as press brakes are more prevalent within the sheet metal world.

Are you looking for an efficient way to bend sheet metal?